Nitrogen input to fields needs to be distributed over the spatial units in a region where the crop is cultivated. For each crop, the regional nitrogen balance is given with total N inputs per N input type, an N outputs or losses per output and loss type.

We base the distribution model on a generic crop-fertilizer-response curve. Such curves have the characteristics that are desirable for the disaggregation of nitrogen input:

Such crop response curves ‘work’ with a maximum yield which are approached at high levels of N input. These maximum yield values are unknown. Figure below gives an overview of the approach indicating parameters, variables, and optimization rules. We use a constant factor \(f^{cropcurve}\) for all regions/spatial units and crops in order to not leave too many degrees of freedom. However, if infeasibilities occur, ‘opening’ this factor to differ between crop types could be a first test. However, the range of possible values for the crop growth scaling factor is narrow:

Therefore, only a narrow range around a value of 0.008 seems plausible. 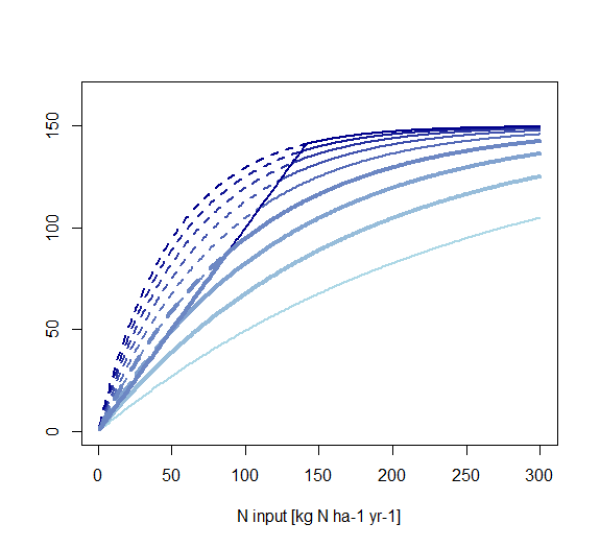 Figure 45: N input rates that give a yield of 80% of the maximum yield for different crop growth scaling factors according to Godard et al. (2008) We assume that manure is applied with less efficiency than mineral fertilizer. First, because we take into account lower nutrient availability in manure with respect to mineral fertilizer (due to reduced opportunity to target release of nutrients to crop demand, thus increasing the chance of nutrient releases in periods with enhanced risks of losses to the environment). Second, due to the fact that higher availability of manure often goes ahead with increased lack of surface where the manure can be applied in a reasonable manner.

Therefore, we assume a decrease of the NUE the higher the share of manure in the fertilizer mix.

We account for this fact by using a different crop response curve for mineral fertilizer and manure. This is realized by varying the theoretical crop curve’s maximum yield.

This is shown in figure below. 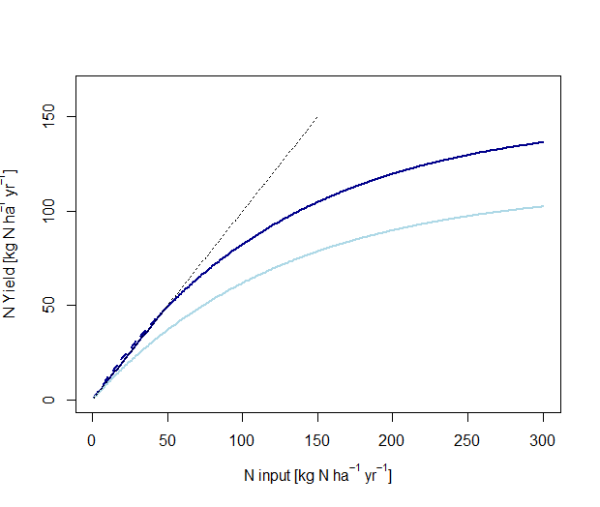 We introduce a dependency of ymx on the share of mineral fertilizer and manure in the mix of the nitrogen source.

Manure can be traded between individual spatial units. Manure trade between regions (or even countries) is covered by the regional model of CAPRI and does not need to be considered here.

The availability of manure is obtained therefore from each spatial unit plus neighboring spatial units within the same region. The range of spatial units from which manure can be used is assumed to a region-specific variable and

Obviously, the total manure available for application must be exhausted:

For each flow of nitrogen and crop, the sum of flows over all spatial units must recover the total flow at regional level for each crop.

This holds both for input flows and output flows (i.e. harvest, surplus).

The maximum (potential) yield is proportional to the relative potential yield (without water limitation).

\(y_{h,c}^{mx}\) = Maximum yield [variable, kg/ha] determining the shape of the crop growth curve in each spatial unit for each crop.
\(r_{h,c}^{py}\) = Relative potential yield [parameter, dimensionless] of crop c in spatial unit h.
\(F_{r,c}^{ymx}\) = Scaling factor [variable, kg/ha] adjusting the relative potential yield so that it gives the maximum yield in the crop growth curve for each spatial unit h and crop c.

Once the total N input per crop and spatial unit is determined, the individual N sources need to be calculated. We have:

At Nuts2 level, y and f are known and ym can be calculated

For each spatial unit, the yield is given from the distribution of irrigation shares and yield.

We can assume that the potential yield ym follows the pattern of the irrigated yield obtained from PESETA.

Calculation of distances between HSUs

Excretion net of all volatilization must be back-calculated so that emissions from applications are not subtracted.