Not formally a component of the baseline calibration procedure, it has become an established habit to validate the calibration of supply using the simulation models themselves. There are many conceivable circumstances where the build-in calibration tests would pass, but a normal simulation nevertheless would not replicate the calibration point, for instance if some necessary and calibrated data is not properly loaded. Furthermore, the calibration does not produce the full report output, but only a limited set of variables. Therefore, a baseline reproduction is generally also needed in any applied project to establish the equilibrium comparison point.

In order to facilitate the evaluation of the calibration point, we run the same scenario as the one used to calibrate the model, but under a different name. “cal” and “ref” are frequently used name suffixes. Since the calibration is done country-wise, the result files of the calibration are found in one gdx-file per country. In order to be able to load all of them into the GUI and compare them to the outcome of the reproduction run, the utility “Merge country data” found under the work step “Tests” can be used. In the figure below the settings are shown that can read in all the country specific gdx files from the results directory (capmod), starting with the string “res_2_1230cap_after_2014_cal”, load a specified symbol (dataout), and store it back into a gdx file with the same name but without country suffix.

Figure 12: CAPRI settings: read in all the country specific gdx files from the results directory (capmod); load a specified symbol (dataout); store the data back into a gdx file with the same name but without country suffix 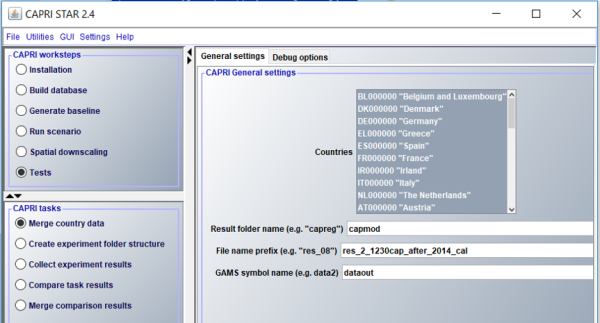 Then, the GUI can be used in a standard fashion to manually compare the activity levels reported after calibration with those computed in a baseline reproduction run.