CAPRI requires that you have a windows computer with Java and GAMS (http://www.gams.com, distribution 28.2 or later is recommended) installed. You need a license for the CONOPT solver. Many tasks in CAPRI utilize parallel computing. It is therefore an advantage if you have a machine that can run many threads in parallel.

STAR 2 and earlier releases are published with a full set of data, i.e. including all the intermediate data required to build the complete database and produce a calibrated baseline. The model with raw data and the consolidated model database are shipped in two compressed archives. For STAR 2.7, they are called “STAR_2.7.zip” and “results_2.7.zip” respectively, and with similar naming pattern for other releases. Follow the steps below in order to install CAPRI on your system. Using CAPRI requires extensive knowledge of how the system works. Please look out for CAPRI training courses on the page of upcoming events. The following bare-bone instructions may nevertheless be sufficient to get the system up and technically running.

1. Ensure that you have Java and GAMS installed on your computer

Click the links to “Code” and “Database” in the table of available CAPRI versions. We recommend using the latest available release.

The stable releases are shipped with only input data, but not with any of the consistent model databases needed to run the model. As mentioned above, there are two options for obtaining the complete and consistent databases needed by and fitting with the CAPRI model. 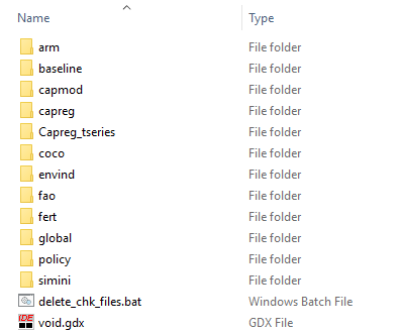 Those are created by tasks executable from the GUI. So, now you need to build all databases of CAPRI. This takes a long time. Depending on the hardware you use, it can take up to several days. In order to keep track of all the various settings required for completing all the steps, the release contains a “batch execution file” that instructs the GUI how to carry out a sequence of tasks without intervention of the user. Here is what you need to do:

The current batch execution file (STAR 2.5) does not take over the path to your GAMS installation as entered in the settings dialogue during installation, but you will have to open the text file and enter the appropriate path manually.