The screenshot below shows an example. All results shown are always expressed in the absolute value and the units used in the result set.

The columns are defined as follows: 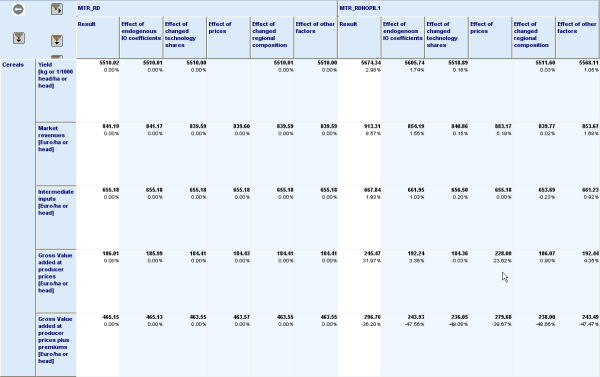 Source: CAPRI modelling system Note: The code is implemented in „reports\yield_change_decomp”. The table can be found in the GUI under “farm ⇒ yield decomposition”.

It should be mentioned that the coding does not use information about potential changes of the premiums paid in scenario against the baseline, so that the results shown for the modified Gross Value Added should mainly show the different percentage changes on income once the level effect of the premiums is considered. The coding also stems from the time before climate related yield shock sceanrios or endogenous mitigation modelling. As the yield decomposition probably has not been regularly checked in this kind of scenarios, it is possible that some changes implemented in the CAPRI supply models need to be transferred to this reporting code to give reliable results in all kind of scenarios.